Use of NIST 800-88 Standard For Drive Erasure

Media sanitization is a core competency for IT organizations in the context of data privacy, data security, and regulatory compliance. Growing concerns about data privacy along with media proliferation has turned data sanitization into a critical business need.

There are various information destruction standards today - each with specific methods and guidelines - to serve the media sanitization needs. For instance, NIST Special Publication 800-88 –laid down under the Federal Information Security Management Act of 2002– outlines Clear, Purge, and Physical Destruction as the 3 methods for media sanitization. The NIST data erasure standard is a secure erase method that can be used to sanitize a vast variety of media including ATA hard disk drives and SSDs, mobile devices, USB removable media, optical media, etc.

NIST Clear and Purge are the preferred methods for sanitizing media (wherever feasible & sufficient). That's because both Clear and Purge methods rely on logical techniques – overwrite, block erase, and cryptographic erase – to sanitize the media. So, there's no e-waste generation and also the storage media can be reused.

The NIST Clear method uses standard read/write commands, techniques and tools to overwrite all the user-addressable locations including logical file storage locations on an ATA hard drive or SSD with non-sensitive data (binary 1s and 0s).

The Clear pattern for media overwriting should include at least a single write pass with a fixed data value such as all zeros. Multiple write passes or values that are more complex may optionally be used.

Note: Overwriting on SSDs (flash storage) may reduce the effective lifetime of the media. Also, it may not sanitize the data in unmapped physical media.

Block Erase is the secondary erasure method for SSDs, which "electrically" erases each block by using internal SSD functions. After successful implementation of the block erase command, the method applies binary 1s across all the user-addressable locations on the storage media and then repeats Block Erase.

It is important to verify the efficacy of Clear and Purge techniques. For instance, for the 3 pass ATA sanitize overwrite procedure with invert pattern, the verification process would simply look for the original pattern.

Storage device configuration such as Host Protected Area (HPA), Device Configuration Overlay (DCO), or Accessible Max Address may hinder the ability to access the entire addressable area of the storage media. Therefore, these should be reset before implementing the sanitization technique.

ATA Secure Erase serves only as a 'Clear' mechanism for flash memory, so there is a possibility that sensitive data may remain in areas such as spare cells that have been rotated out of use. So, use the SECURITY ERASE UNIT command only after ascertaining its efficacy, based on the type of media.

A Data erasure software like BitRaser can perform media sanitization by overwriting the data, based on NIST Clear and Purge methods. This plug-and-play data erasure tool can add up to 5 customized erasure algorithms. It also provides tamper-proof audit trails to help businesses attain compliance with data security & privacy standards such as SOX, GLB, HIPAA, ISO27001, EU-GDPR, and PCI-DSS. The Basics of Gramm–Leach–Bliley Act (GLBA) Worth Knowing 10 CCPA Questions Every Tech Executive Should be Prepared to Answer 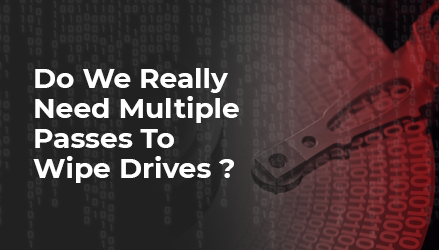