How to Perform Cryptographic Erasure on an SSD?

Cryptographic erasure is a media sanitization technique based on erasing or replacing the Media Encryption Key (MEK) of a Self-Encrypting Drive (SED), including modern SSDs that store data in an encrypted form. SEDs have “always-on” encryption, and therefore, performing cryptographic erasure (or crypto erase) on such SSDs renders the target data unrecoverable — in the form of ciphertext.

Notably, the crypto-erase technique can sanitize all addressable memory locations on an SSD except unencrypted areas such as those storing pre-boot applications. Also, the effectiveness of cryptographic erasure depends upon the encryption algorithm’s robustness.

This KB outlines a professional technique to perform cryptographic erasure on SSDs using BitRaser Drive Eraser software. The tool implements the Cryptographic Erase (CE) technique to sanitize all types of self-encrypting drives, and it generates tamper-proof certificates & reports for the cryptographically erased SSDs.

Using the software, you can perform cryptographic erasure on the following types of solid-state drives:

BitRaser Drive Eraser performs cryptographic erasure on SSDs within 15 minutes based on the following steps and requirements.

In this step, you download the software ISO file from your BitRaser cloud account after purchasing the licenses.

2. Download the BitRaser ISO file by clicking the “Download BitRaser Drive Eraser ISO” link in the dropdown menu on the top right corner. Save the ISO file on your local computer.

In this stage, you burn the BitRaser ISO file on a USB flash drive to create a bootable wiping media for executing SSD cryptographic erasure in Stage 3. Here are the steps: Once you have the bootable USB ready, follow these steps to perform crypto erase: 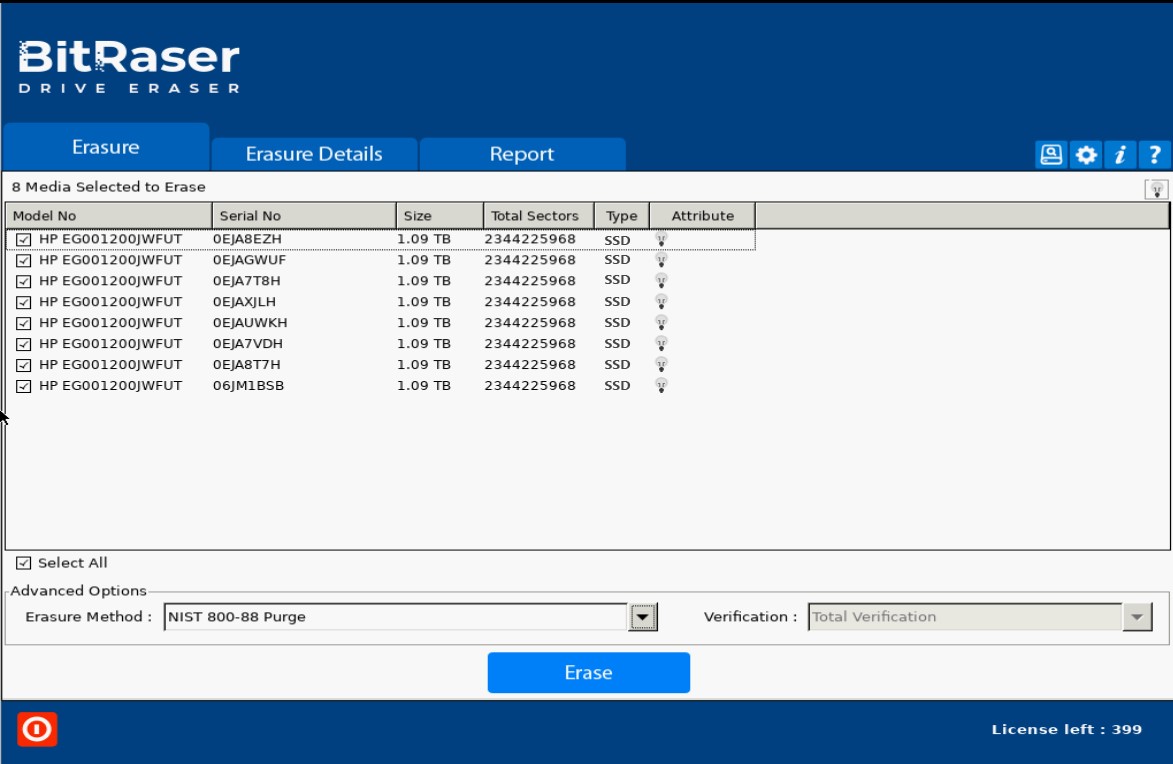 Using the method described in the KB, you will be able to perform cryptographic erasure on solid-state drives as per the NIST 800-88 Purge standard or BitRaser SSD & Secure Erase Standard. After erasing the drives, the software will generate digitally signed reports & certificates of erasure and upload them to your BitRaser Cloud account.